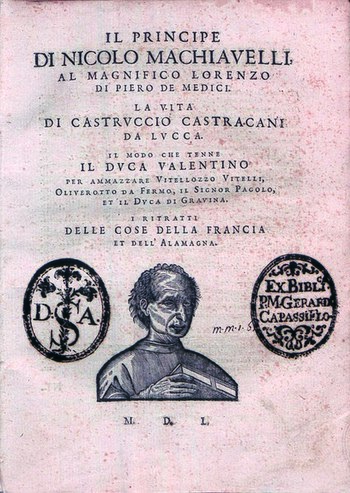 Title page of a 1550 edition.
"And here comes in the question whether it is better to be loved rather than feared, or feared rather than loved. It might perhaps be answered that we should wish to be both; but since love and fear can hardly exist together, if we must choose between them, it is far safer to be feared than loved."
—What everyone remembers from The Prince
"Nevertheless a prince ought to inspire fear in such a way that, if he does not win love, he avoids hatred; because he can endure very well being feared whilst he is not hated."
—What he says right afterward, but nobody remembers
Advertisement:

Written by Italian statesman Niccolò Machiavelli in 1513, The Prince (Il Principe) is the single most famous political treatise and the first entirely secular work of The Renaissance. At the time it was first published, The Prince was seen as extremely scandalous for its endorsement of ruthlessness and amorality. Nevertheless, it quickly became popular with politicians and remains highly influential in Western politics today. If there's any Manipulative Bastard in anything set after the Renaissance, it's very probable he's taken cues from this book.note Although they aren't quite as likely to actually have an in depth knowledge of the book as much as a pop-culture impression. However, it should noted that many fascists during the 19th and 20th centuries were mostly inspired by this work, as many fascist dictators such as Hitler and Mussolini kept a copy of this work, the latter even wrote a thesis relating to this work.

Most people are familiar with Machiavelli as the man who said, "it is better to be feared than loved". Over the years Machiavelli's name has become associated with dishonesty, deceit, and ruthlessness, so much that they even made his name an adjective most often used for unsavoury characters. However, Machiavelli repeats that while it is better for one to inspire fear, one should also try to inspire love, and must also remember not to inspire hatred. A very common mistake people make is to conflate, "Be pragmatic," with, "Be an asshole." Everything a leader says and does need not automatically be a duplicitous front. A leader is perfectly free to have ideals, and be kind, generous, and just with their subjects. The main point is that if achieving one's goals means the leader must commit unsavoury acts, then they must do it. Going down in flames with your ideals intact is a fine and noble thing to do - some may say it is a moral obligation - but that is not the point of this book. The Prince should be regarded as a guidebook to maintaining power for the good of the prince and ultimately the state, not how to kick puppies left and right.

Also, he wrote this book when Italy was in a very chaotic state: for him, the prince had to rule with an iron fist to ensure order. Finally, one must remember that Machiavelli was attempting to ingratiate himself with the Medici, who had just taken over Florence (and promptly ignored his advice: they chose to be universally loved, and ended up massively in debt for it), and that most of his work was about supporting (smaller) republican regimes with an emphasis on freedom (although the means he recommended for operating and preserving them were rather, well, Machiavellian); more educated political theorists tend to regard him as something of a Deep Cover Agent for what eventually became modern liberal democracy. Though if so, that would ironically be a Machiavellian plan in itself. As later historians noted, Machiavelli wrote the book in vernacular and in plain language which means that it's a book that has had a wider audience than earlier works of political sciences.

As of note, "Prince" (or "principe" in the original Italian) at the time just meant "ruler", more or less (from Latin "princeps" = "first one"). It didn't mean "the son of a king". If there was only one person in the state who really mattered, it was called a monarchy. Even a democratically elected president would have still been called a "Principe".

An English translation, now in the public domain, is available here

Compare The Book of Lord Shang, whose traditional author actually was that big a prick. See also Discourses on Livy, Machiavelli's other book, and Hobbes Was Right. Also compare Kautilya's Arthashastra, which is a much more humane but ancient by many hundreds of years to the Prince.

(It's worth noting that the English translation of The Prince came out several years after the English rebuttal book was published. Good news travels fast, it seems.)