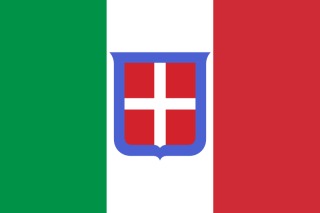 This was the flag of the Kingdom of Italy.
Advertisement:

A series of wars that brought about the unification of Italy, also known as the Risorgimento (resurgence).

The conflict began in 1848 when the Kingdom of Sardinia (so called because the island, in spite of being basically a colony, provided the Piedmontese House of Savoy with the title of king) declared war on Austria, while most of its cities - especially Milan, Venice and Vienna - were in revolt. The Sardinians had limited support from the other major Italian states (the Grand Duchy of Tuscany, the Kingdom of the Two Sicilies and the Papal States). Initially, the Italian allies succeeded in capturing Milan, but the Sardinian King's (at the time Carlo Alberto) ambiguous attitude, coupled with his fear of losing the Kingdom's sovereignty, led to the dissolution of the alliance. The Austrians counterattacked and defeated the Sardinians at Custoza in July 1848 and reclaimed Lombardy, concluding an armistice. The following year Carlo Alberto denounced the armistice and attacked, but was quickly outmanouvered by Austrian feldmarshall Joseph Radetzky and decisively defeated at Novara.

The war ended with the Kingdom of Sardinia paying an indemnity to Austria and Carlo Alberto abdicating in favour of his son.

That defeat confirmed that the Kingdom of Sardinia could not defeat the Austrians without an equally powerful ally. With the support of their Prime Minister - Camillo Benso, Conte di Cavour - the Italians found an ally in Napoleon III, who signed a secret alliance. Cavour proceeded to provoke Austria with a series of military manoeuvers near the border, which sparked a war in April 1859 when an ultimatum to demobilise went unheeded.

The war's notable high point was the Battle of Solferino in June 1859, where a combined Franco-Sardinian Army, led by Napoleon III and the Sardinian King Vittorio Emanuele II, fought the Austrian Army led by Emperor Franz Josef; that was considered the largest battle since the Battle of Leipzig (with both sides fielding roughly 160,000 troops each). The Franco-Italian Army defeated the Austrians, however, fearful that more German states would involve themselves in the war, Napoleon agreed to an armistice and Sardinia was awarded Lombardy in the ensuing Armistice of Villafranca. A Swiss man named Henry Dunant

witnessed the battle, and as he aided the injured with the help of the townspeople nearby, it led him to create a humanitarian organization now known as The Red Cross.

In the same month, the French advanced to the town of Magenta in Lombardy and won a decisive battle there. Coincidentally, a new color was created from aniline dyes after mauve, and the deep purplish-red color was eventually named magenta in honor of the battle.

The following year, with French and British approval, Sardinia annexed Parma, Modena, Tuscany and the Papal Legations as part of Cavour's absurdly audacious plan to conquer the Two Sicilies, whereas France was given Nice and Savoy as payment for their support in the war.

The Expedition of the Thousand

In 1860 a small volunteer force - the so-called "Expedition of the Thousand", an army led by Giuseppe Garibaldi - landed in Sicily and began toppling the Bourbon rule in the Kingdom of the Two Sicilies during a short, but incredibly successful, military campaign which lead to its annexation by Sardinia (with the justification that if they didn't Garibaldi would have caused another mess there and in Parma, Modena, Tuscany and the Papal Legations, the lands that the Sardinian Army annexed as it marched south to "stop" Garibaldi).

On March 17, 1861, the Kingdom of Italy was proclaimed: it was essentially an extension of Sardinia, where Sardinian laws (actually Piedmontese, as when the laws of the two components of the Kingdom were unified it was the Piedmontese ones to be extended over the rest) not only remained in effect but were also extended to the rest of the Peninsula. Turin remained the capital until 1864, when it was moved to Florence.

Or Third War of Italian Unification. Better known as the Austro-Prussian War of 1866, with an appendix in the the Franco-Prussian War of 1870/71. The Kingdom of Italy attacked the Austrians, but was defeated on the field and on sea. However, as it was allied to Prussia, it ended up on the winning side nonetheless and was able to annex Venice and its adjoining territories. As a consequence of the subsequent defeat against Germany, France was no longer able to protect the remnant of the Papal State, enabling the Kingdom of Italy to annex it on September 20, 1870, and make Rome its capital.