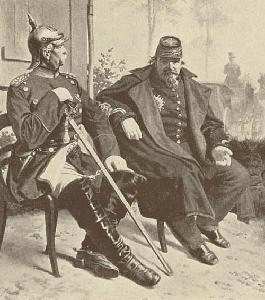 Fest steht und treu die Wacht, die Wacht am Rhein! note Firm stands, and true, the watch, the watch on the Rhine!
Nous sommes dans un pot de chambre, et nous y serons emmerdés. Translation  We are in a chamber pot, and are about to be shat upon.
—French General Auguste-Alexandre Ducrot
Advertisement:

The Franco-Prussian War - known in Germany as the German-French War (Deutsch-Französischer Krieg) or War of 1870/71, and in France as the Franco-German War (Guerre franco-allemande) or "Guerre franco-prussienne" - was the last of three wars that led to the unification of a plethora of Germanic states into one single empire (the first since the Holy Roman Empire had any political power).

There were multiple causes of the war, including but not limited to, a potential sale of Luxembourg to France, the vacancy of the Spanish throne, and the Prime Minister of Prussia modifying and publishing an insulting telegram

The result was a 10-month Curb-Stomp Battle as the Prussians decimated the French in all but three battles (where the French won one at Broney-Colombey and fought to a draw in two others), captured the French Emperor, Napoleon III, and unified Germany.

Another result of the war was Germany's annexation of Elsaß-Lothringen (Alsace-Lorraine - which actually amounted to Alsace-Moselle note Three out of four departments of Lorraine remained French, only Moselle was annexed, but German liked calling it "Lothrigen" still. The territory of Belfort was part of Alsace, but remained French, in part because Germans besieged but didn't manage to take the Belfort citadel before the war ended.), which they held until 1918. This would prove a major problem, as Alsace-Moselle made France implacably hostile to Germany, as well as changing the international perception of Germany from victim to aggressornote The main reason for the annexation was quite interestingly dull. The Prussian leadership realized that the direct border between Germany and France would need fortification, but it was outside the crown lands of Prussia. The rulers of the other German states retained substantial autonomy under the empire and did not want Imperial forts on their land. Alsace-Moselle was annexed as Imperial territory, ruled directly by the Kaiser, which got around the problem, though the territory would start gaining substantial autonomy in the 1910s just before the Great War broke out. In other words, they had to move the border in order to have one they could fortify. Note that the way France annexed Alsace from the Holy Roman Empire in the 17th century during the Thirty Years' War was way more violent, so violent that the area had to be repopulated with people coming from Switzerland.. Moreover, the French had to leave Rome, indirectly finishing the Unification of Italy.

The defeat of Napoleon III led to his fall and the proclamation of the Third French Republic, which continued the war longer than the Germans expected by continually raising new armies even as Paris was besieged. In a bloody epilogue after the signing of the definitive peace treaty French fought French as the forces of the conservative central government put down the Paris Commune, a short-lived revolutionary government which was in control by revolutionary members of the French working class. While short-lived and petty by that time, it would inspire a book by Karl Marx (The Civil War in France) and later Vladimir Lenin to start the October Revolution and create the Soviet Union, thus being responsible for communism's first steps as a major power through the 20th century.

Another consequence of the end of the war is that Meiji Japan, which was looking to modernize its armies by taking example on France, felt unimpressed by their defeat and decided to emulate the Germans instead. The shift was not total, and French military advisors were still sought after, and had an especially profound impact on the Imperial Japanese Navy (though still not as profound as the impact of the British Royal Navy, to whom the Japanese were mainly looking to because, you know, they were the 19th-century Royal Navy). Despite the humiliating defeat, the Japanese foreign minister in a visit in France in 1873 said that he had profound respect for their courage in the face of overwhelming odds.

By the end of the war, the balance of power in Europe had been completely upended, as France's centuries-long superiority over the rest of Europe was abruptly terminated. What had once been a chain of small and mid-size German states had, within a year, become the single most powerful nation on the continent. Even worse (from the French perspective), Germany was growing stronger, rapidly increasing its population and industry.

This in turn started a chain of events that led to World War I. France, desperate and humiliated, formed a series of alliances in case they ever went to war with Germany again, and Germany did the same. With one exception, all of these alliances became the Allied Powers (France, Great Britain, and Russia, as well as the other countries they gathered after the war began) and the Central Powers (Germany and Austria-Hungary, and the countries they gathered). The newly-united Italy was the exception - Italy was in an alliance with Germany, but didn't enter World War I until the Allied Powers offered them parts of the Austro-Hungarian Empire.

The conflict is a major victim of The Greatest History Never Told in the media nowadays, having been superseded by the two World Wars in Europe's collective memory.