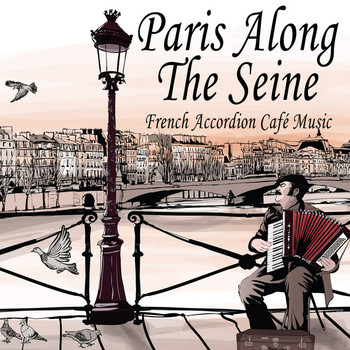 ♫ "La fille de joie est triste / Au coin de la rue là-bas / Son accordéoniste / Il est parti soldat" ♫
So, your character visits France. Chances are that they will visit Paris (often an idealized/cliché version of it, and nothing else, because France is Only Paris), eat delicious French cuisine like frog legs and escargot, and drink lots of wine... and all of these scenes will usually be accompanied by cheerful accordions.
Advertisement:

Despite originating from Italy, these instruments became really popular in France in the 19th century, and soon, cafés and cabarets in the country were filled with the sound of these instruments. During the 1930s, the accordion-heavy bal musette became incredibly popular, and this music style is linked to traditional France in the collective mind to this day. It isn't rare to find beggars or street artists playing accordion in the Parisian subway or in the streets even now (though it can be rarer in other French cities).

On a side note, accordion is part of some non-Parisian French regions' traditional music such as in Alsace (where it sounds closer to Polka and German brass band music, for historical reasons), but it's as rarely featured in fiction as non-Parisian areas of France are, and thus bal musette/waltz-style accordion music dominates in fictionland.

Despite the tendency to associate accordions with France/Paris, the instrument is far from exclusive to that country. Louisiana French culture is well-known for accordion-heavy music such as Zydeco, and you're likely to hear accordions in the musical theme of a Ragin' Cajun when it's not fiddling. Certain styles of Mexican music, most especially norteño, also make extensive use of the instrument. South American countries like Brazil or Colombia and most especially Argentina with the tango scene, as well as Eastern European countries are rather fond of it as well, but this fact isn't as widely known as France's case. The largest non-French accordion usages most people are likely to recognize are polka music, tango music and sailing music.