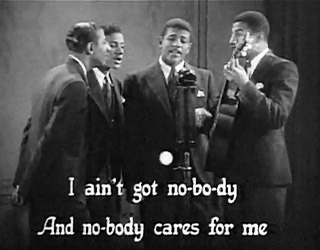 "I'll tell you folks about them all, if you'll sing and follow the bouncing ball!"
— Max Fleischer Screen Songs Cartoon Any Little Girl
Advertisement:

It's time for a singalong! Music! Words! And... Follow the Bouncing Ball, everyone!

"Follow the bouncing ball" was a technique of directing singalongs in movie theaters where the lyrics are displayed as onscreen subtitles while a ball bounces along each word or syllable of the lyrics, in sync with the actual beat and rhythm of the song.

Sort of the karaoke of its time, but intended for a mass audience. Musical literacy was a much bigger deal in the early 20th Century.

According to Wikipedia, the bouncing ball was named and invented by Max Fleischer,

the founder of Fleischer Studios, in 1924. Usually the "ball" is a big red dot, but sometimes it'll be a different color, or some manner of icon appropriate to the setting. The ball may also highlight whatever word or syllable it touches, or leave a dotted line as it travels across the words.

To this day, kids' singalong tapes and DVDs still use this technique from time to time; modern karaoke videos use a variant without the ball, merely by highlighting the appropriate text with the appropriate rhythm.

There's also a dangerous bouncing ball which you probably shouldn't follow. Do not confuse with Happy Fun Ball.

The main cast sings "The Equestranaut" theme song while Mini the pony acts as the bouncing ball for the lyrics.

The main cast sings "The Equestranaut" theme song while Mini the pony acts as the bouncing ball for the lyrics.