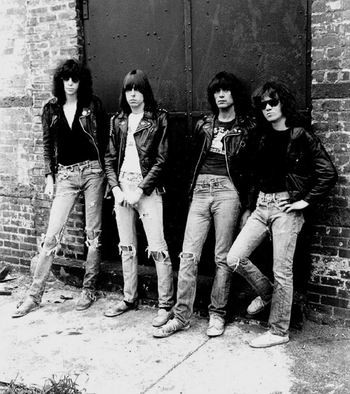 The original line-up of The Ramones. From left to right: Joey Ramone, Johnny Ramone, Dee Dee Ramone and Tommy Ramone.
"Well!!! It's good to be here on TV Tropes, and it's good to see all of you again; take it, Dee Dee!"
"ONE, TWO, TREE, FAH!"
Influences:
Advertisement:

The Ramones, an American rock band formed in 1974, are widely regarded as the first Punk Rock band, and could even be considered something of a turning point in rock history.

Their influence on the Punk Rock movement was musical rather than political. While the Sex Pistols or The Clash's lyrics focused on sticking it to the man, The Ramones preferred to talk about common juvenile themes, like love, drugs, alienation and cheap horror movies. In contrast to the luxuriant symphonic rock that was dominant at the time, they wrote very simple, very fast songs.

Their other schtick was to adopt pseudonyms; all the various members of the band went by "[First Name] Ramone" even though none of them were related, and (for that matter) none of them had that surname in real life. While their influence on rock music is widespread (one magazine ranked them the second-greatest band ever, behind only The Beatles), their records never sold well and they toiled on in relative obscurity for many years before finally giving up the ghost in 1996. They've released a number of solo albums afterwards, the most notable of which is Joey Ramone's Don't Worry About Me.

The Ramones formed in Queens, New York City. The earliest incarnation of the band had Johnny Ramone (John Cummings) on guitar, Joey Ramone (Jeffrey Ross Hyman) on drums and Dee Dee Ramone (Douglas Colvin) on vocals. When Dee Dee's young vocals proved unable to sustain live performances, they switched, with Dee Dee sticking to backup vocals and mostly concentrating on bass, and Joey assuming lead vocals. The band still needed a drummer, and after manager Thomas Erdelyi had trouble finding a proper drummer, he assumed the duties himself, dubbing himself Tommy Ramone.

The band debuted in 1974, playing at various clubs around NYC, most notably CBGB's, which became famous for being a showcase for the budding Punk Rock movement. They recorded their first album, Ramones, in 1976 on the low budget of $6400, and while the record wasn't a commercial smash or anything - in fact, at their first performance outside New York, in Youngstown, Ohio, about ten people showed up - it was a further catalyst for the punk scene and got glowing reviews from critics. They were further vindicated when they proved to be more popular in the UK, most notably influencing bands like the Sex Pistols and The Clash, and playing career defining gigs second-billed to the Flamin' Groovies.

Two further albums, Leave Home and Rocket to Russia, followed in 1977. While the former did even worse than the debut, Rocket to Russia was their best seller to date, hitting #49, and the single "Rockaway Beach" hit #66 - the highest charting single the band would ever have. By this time, Tommy stepped down as drummer for good, but remained friends with the band and would go on to produce for them. His replacement was Marc Bell, aka Marky Ramone, who recorded 1978's Road to Ruin with the band.

After the band made a guest appearance in Roger Corman's cult movie Rock 'n' Roll High School, the band got in touch with famous 1960s pop producer Phil Spector in 1980, to create an attempt at a breakthrough album, End of the Century. The sessions were fraught with tension between the band (who were always the 'get in, get out' types) and Spector (a notoriously meticulous Control Freak). The sessions did pay off in an album that charted at #44, their highest charting album ever, but its got a mixed reputation, among fans and the band itself, for presenting a slicker, poppier Ramones. Oddly enough, their cover of "Baby I Love You" did huge business in the UK.

The band soldiered on with a few more pop crossover attempts, with relationships in the band straining further. Most notably, around the early 80s, Johnny stole Joey's girlfriend, Linda, which Joey never got over for many years, and they rarely spoke to each other since. Despite this, the band never slowed down, still playing hundreds of concerts a year. Marky, who was abusing alcohol, got fired from the band and replaced with Richard Reinhardt/Richie Ramone, who debuted on the 1984 album Too Tough to Die, a more rock-oriented album featuring Tommy Ramone behind the boards alongside old school Ramones producer Ed Stasium.

Despite this, Animal Boy was one last grab at a pop crossover, this time produced by Jean Beauvoir of the Plasmatics, and sporting a funny, memorable music video for "Something To Believe In," a parody of the charity anthems and organizations of the day ("Ramones Aid," "Hands Across Your Face"). Animal Boy still did better business overseas than in their homeland, continuing a trend for them, so they went back to straight rock music again for 1987's Halfway to Sanity. Richie left the band after the album's release, upset that he wasn't given a share of the t-shirt sales after years with the band. The band attempted to recover by taking on Clem Burke from Blondie, dubbing him "Elvis Ramone," but he only lasted two shows behind the kit before the other Ramones decided he wasn't fast enough.

Luckily, Marky Ramone was newly sober, and returned to the band for their eleventh studio album, Brain Drain (mostly notable for their song "Pet Sematary," written for the film of the same name). Unfortunately, it was just in time for longtime bassist and songwriter Dee Dee Ramone to leave, in a miserable haze of addictions, depression, and an eating disorder. Dee Dee still continued to contribute songs to the band, however - in fact, the band once bailed him out of jail after a drug bust by trading a few songs for it. After leaving, however, Dee Dee embarked on an infamous series of odd career moves, including putting out rap music under the name Dee Dee King (to say the least, it didn't go over well

The band reunited again with producer Ed Stasium and released Mondo Bizarro, which did huge in Brazil, but the band were embittered by this point of never breaking through in America - in South America, they'd be packing stadiums and getting mobbed in the streets, but back home in North America, they were still playing smaller clubs. By 1995's ¡Adiós Amigos!, they declared they were hanging it up unless the album did huge numbers (again, it didn't), but nonetheless, they embarked on the longest farewell tour in the history of rock & roll, going over two years and spawning two live albums (Greatest Hits Live and We're Outta Here!). Their last show was in Los Angeles, in August 1996, featuring special guests like Lemmy from Motörhead, members of Rancid and Soundgarden, Pearl Jam's Eddie Vedder and even a returning Dee Dee. After this show, the band unceremoniously went their separate ways.

After a seven-year battle with lymphoma, Joey passed away in April of 2001, in New York, just shy of his 50th birthday. In early 2002, the band was inducted into the Rock & Roll Hall of Fame, where Tommy mentioned in the midst of their speeches that while it meant a lot to them, it "meant everything to Joey." Two months after, Dee Dee Ramone, who'd battled drug addictions for most of his life, was finally found dead of a heroin overdose in his apartment.

In 2003, the group got their own documentary, End of the Century: The Story of the Ramones. It features interviews with everyone who'd been in the band, plus members of their families, contemporaries like Debbie Harry and Joe Strummer, and more, as it chronicles the band's history from their start in CBGBs to their Hall Of Fame induction. While Joey and Dee Dee never survived to see the film, Johnny did, and his reaction was printed on the box cover: "It’s accurate. It left me disturbed." It should be noted that Johnny, a notoriously thuggish taskmaster through much of the band's tenure, did try to repair his relationships with his former bandmates after the band ended, largely to no avail. In 2004, Johnny Ramone succumbed to prostate cancer, survived by his wife Linda. In 2014, the last original member, Tommy, succumbed to bile duct cancer.

In July of 2016, a 40th anniversary deluxe edition of Ramones was released, featuring the album in stereo and mono mixes, outtakes, and an unreleased live album. Similar deluxe editions followed for Leave Home, Rocket to Russia and Road to Ruin for their 40th anniversaries, all of which contain outtakes, alternate takes and unreleased live recordings.

One of the more tragic facts about the band, is that they're now arguably far more famous and are given more credit now than when they were performing, and after every founding member has died. Their legacy lives on through the enduring influence of their own music as well as punk rock itself, plus one of the most iconic logos in rock history. (You've seen the shirts.)

"Pet Sematary" is a single by American punk rock band Ramones, from their 1989 album Brain Drain. The song, originally written for the Stephen King 1989 film adaptation of the same name, became one of the Ramones' biggest radio hits and was a staple of their concerts during the 1990s.

"Pet Sematary" is a single by American punk rock band Ramones, from their 1989 album Brain Drain. The song, originally written for the Stephen King 1989 film adaptation of the same name, became one of the Ramones' biggest radio hits and was a staple of their concerts during the 1990s.