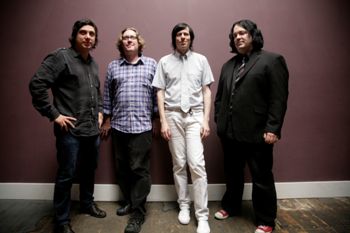 The Posies are an Alternative Rock/Power Pop band formed in Bellingham, Washington in 1987 by Jon Auer and Ken Stringfellow. The band released their debut album Failure in 1988. Their second album Dear 23, released in 1990 was their major label debut and was well received. It included the singles "Golden Blunders" and "Suddenly Mary". They released 3 other albums before focusing on other projects. In 2005, they made their comeback album, Every Kind of Light. 2 songs, "I Guess You're Right" and "Love Comes" were packaged as sample music in Windows Vista computers. In 2010, they released their latest album Blood/Candy. Ken Stringfellow and Jon Auer have also released their own solo records, with Ken's most recent album, Danzig in the Moonlight, being released in 2012.

Their current lineup is made up of: