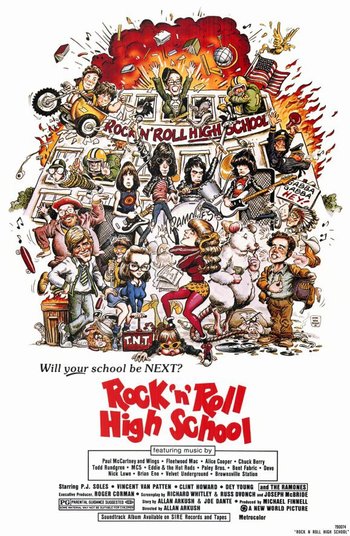 Vince Lombardi High School greets its latest principal, Miss Togar (Mary Woronov), replacing yet another principal who went mad trying to keep the kids in line. Togar sets her evil sights on Riff Randall (P.J. Soles), who's popular, sexy, uncontrollable... and the school's biggest fan of the Ramones. When the Ramones are scheduled to tour through the city, Riff tries out various schemes to ensure she gets to see the concert and even meet the band to give them a song she's written... but Togar wants Riff punished with detention for eternity if it means getting rid of rock and roll from the school.

A sequel called Rock 'n' Roll High School Forever followed in 1991, which featured a few returning characters in addition to many new ones.