Film / Revenge of the Nerds 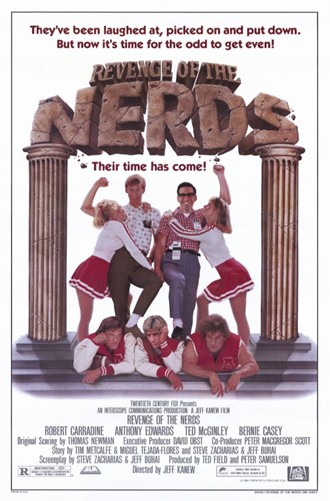 "NERRRRRRRRRRRRDS!"
— Ogre, when he first spots Gilbert and Lewis at Adams College
Advertisement:

Revenge of the Nerds (1984) is a classic '80s teen sex comedy, one of the rarer breed that takes place in college instead of High School. After the football team accidentally burns down their shared house in an ill-conceived 'fire breathing' stunt, they commandeer the freshman dorms as their own. The Freshmen are allowed to pledge fraternities earlier than usual so they'll have a place to live, but your typical frats' well-known aversion to scholarly types leaves the nine nerdiest new students out in the cold.

Not to be discouraged, the nerds decide to start their own frat, and through an oversight are given permission to set up a branch of the normally all-black fraternity Lambda Lambda Lambda (ΛΛΛ). But all is not well; the existing frats, not to mention the resident jocks, don't appreciate nerds horning in on their territory, and so begins a war of attrition that involves vandalism, nude photos, the liberal application of 'liquid heat' to jockstraps, and various other wacky hijinks.

Was followed by three more sequels, one a theatrical film and the last two Made For TV Movies:

A remake began production in late 2006, but was canceled before completion.

"Tropes of the Nerds"

College Humor guys want to do an 80s comedy-style prank on their friends, but discover that all of their ideas are actually cases of sexual assault.

College Humor guys want to do an 80s comedy-style prank on their friends, but discover that all of their ideas are actually cases of sexual assault.