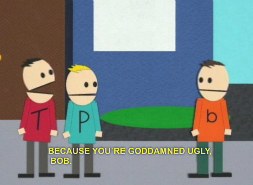 Your face looks like somebody tried to put out a forest fire with a screwdriver!
"In the show, his father burned almost half of his face off. Here, I think he forgot to put sunblock under his eye or something."
— The Nostalgia Critic (regarding Zuko from Avatar: The Last Airbender) in his review of that show's cinematic adaptation
Advertisement:

The physical equivalent of an Informed Attribute and often a subset of the Informed Flaw. A character who is not different in any discernible way from the rest of the cast is found by them to be freakish in some way that should normally be obvious to the audience.

Distinct from Take Our Word for It in that the sight the cast is reacting to is still actually shown. This can be done deliberately if you want to get all meta about it. On the flip side, even very extensive scarring done too realistically may be barely visible on camera.

In animated or drawn media, it might be the result of Generic Cuteness, Only Six Faces or both. Hollywood Homely and Informed Attractiveness are subtropes. The inversion, where nobody notices a character's actual deformity, is an Unusually Uninteresting Sight.