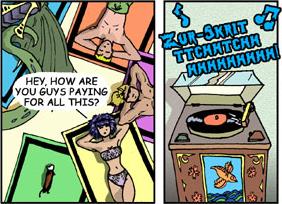 "Jonathan Morris has a dream: to be the first male Knicks City Dancer. There's only one problem...
WHIRRRP!!
...He's the President of the United States!"
— The Modern Humorist, "Movie Trailer Cliché Theater"

The plot is moving at a predictable pace toward a foregone conclusion. Suddenly, something shocking happens, disrupting the action and going off somewhere totally unexpected. With the sound of a phonograph needle being pulled violently across a vinyl record, the Background Music, along with everything else, comes to a screeching halt.

Please note that if you wish to use the sound in a bit of your own, just buy (or get

) a prerecorded version. In spite of how easy it is to synthesize the sound, it's insanely hard to organically produce this noise using an actual record player, and it's depressingly easy to permanently damage an album or the player itself, so Do Not Try This at Home, at least for any records you care about.

Incidentally, while questions did emerge in the '90s and most of the 2000s regarding younger generations' ability to discern what exactly the sound effect was meant to be, the Vinyl Revival (which began the same year this very page was created, funnily enough) brought vinyl records back into the public consciousness to enough of an extent for the source of the record scratch sound to be just as easily identifiable to the youth of today as to generations prior.

A variant is Letting the Air out of the Band, which happens when you cut the juice to the rotation motor without jerking the needle. Do not confuse with Musicalis Interruptus. Compare Screeching Stop. Depending on the circumstances, the Moment Killer may be responsible. When it's Background Music going silent, see Sudden Soundtrack Stop. Can be used to accompany a humorous Double Take.

There then follows a blob of peanut butter on the record, followed by the big black skatey bit.

Luigi and Saiko have successfully saved Mario from a disease caused by bad spaghetti. Unfortunately for them, there's only one way out...

Luigi and Saiko have successfully saved Mario from a disease caused by bad spaghetti. Unfortunately for them, there's only one way out...