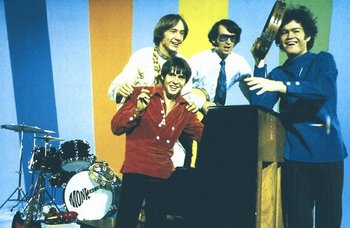 This article is primarily about the band; the series has a page here.

The Monkees started when two TV producers, Bob Rafelson and Bert Schneider, placed an ad in entertainment industry trade papers calling for "Folk & Roll Musicians-Singers for acting roles in new TV series". After hundreds of hopefuls auditioned, the "4 insane boys" who made the cut were Former Child Star and Garage Band singer Micky Dolenz,note His parents were character actors George Dolenz, best known as the star of the ITC Entertainment series adaptation of The Count of Monte Cristo, and Janelle Johnson, who appeared in The Brute Man expatriate Brit turned Broadway musical head-liner Davy Jones (not to be confused with the ocean spirit of the same name), Texas-born singer/songwriter Michael Nesmith, and Connecticut-raised Greenwich Village folkie Peter Tork. While all four Monkees had previous musical experience, Nesmith and Tork had no professional acting experience (the two had some high school and college acting creds, and Tork appeared in a long-lost short film made by an acquaintance in his college years), but they adapted quickly. Screen Gems partnered with Raybert Productions (Rafelson and Schneider's company) to produce the pilot. NBC picked it up as a series, and plans were quickly made to issue their music alongside the series on the newly-created Colgems (Columbia Pictures and Screen Gems) label, which would be distributed by RCA Records. (RCA owned NBC at the time.) The concept of a Hollywood studio putting together a Beatles-like band from scratch attracted much attention to the project, with the band being dubbed The Prefab Four, though Rafelson has said that he viewed The Monkees as being like an Arranged Marriage of talented guys, using The Beatles as an inspiration, rather than a coldly cynical Follow the Leader situation.

Their music was an instant smash — tellingly, the first single, "Last Train to Clarksville" (written by the team of Tommy Boyce and Bobby Hart, who also produced the debut album and contributed dozens of songs over the next few years) started climbing the charts before the TV series went on the air — and the "4 insane boys" soon found themselves major stars. Still, musical director Don Kirshner rarely let them play on their records (or write their own songs)—which was kept secret until the frustrated band revealed it to the media, losing some credibility in the process. Continuing conflict culminated in Kirshner getting fired, and the Monkees took control of their music and show (with Nesmith holding most of the reins), both of which became increasingly free-wheeling and psychedelic. Even though the four had gotten greater control of song-writing, the band continued to take advantage of the pool of songwriters assembled for the show, since — paraphrasing Peter Tork — if you had access to Neil Diamond and Carole King in their prime writing songs for your band, wouldn't you use those songs?

The hits continued for a while, even after the Monkees gave up their TV series after its second season. However, the group's film Head, a surreal, deliberately plot-less Deconstruction of the band's journey through the Show Business meat grinder, was a flop (although it's become a Cult Classic). The band's television special, 33 1/3 Revolutions per Monkee, was a disappointment as well, and Tork left the band in November of 1968. Nesmith stuck around for two more albums (Instant Replay and The Monkees Present), both of which sold poorly, before leaving the band himself in February of 1970. Now reduced to a Dolenz and Jones duo, the Monkees still owed Colgems one more album, and though there was no shortage of releasable tracks in the vaults, the label* Colgems itself was on its last legs. Columbia Pictures had acquired the successful independent label Bell Records in 1969 and planned to turn it into their primary outlet for record releases, phasing Colgems out in the process. opted to send them to New York to record some new songs with Jeff Barry, who'd produced More of The Monkees. The resulting album, Changes, marked a return to the bubblegum pop of the early albums. However, the songs on Changes were not as catchy or distinctive as the ones on the band's early albums. Changes didn't chart, and that was the end of the Monkees. The four ex-members went on with their lives—until 1986.

In 1986, MTV began celebrating the Monkees' 20th anniversary by rerunning their TV series. The reruns got great ratings, and suddenly the Monkees were a viable proposition again. Dolenz and Tork were persuaded to record some new tracks for a Greatest Hits album, one of which, "That Was Then, This Is Now", even charted in the top 20. Davy Jones rejoined the group, and the trio recorded a new album, Pool It, and also began touring again. The independently wealthy Nesmithnote His mother had invented Liquid Paper correctional fluid, and he inherited her fortune when she died. He had also founded the Pacific Arts Corporation, one of the first home video companies. was missing from Pool It and most of the concerts, but he returned in 1996 for the band's 30th-anniversary swan songs as a quartet—Justus, the only Monkees album not to feature any outside musicians, songwriters or producers, and its follow-up TV special Hey, Hey, It's the Monkees (which Nesmith also wrote and directed). Since then, Creative Differences and Peter Tork's health problems (he was diagnosed with a rare form of head and neck cancer, Adenoid Cystic Carcinoma, in 2009) seemed to have destroyed any chance of another reunion. However, in the summer of 2011, Jones, Dolenz and Tork embarked on a hugely successful concert tour commemorating the band's 45th anniversary.

Sadly, a full reunion became impossible in 2012, when Davy Jones died of a sudden heart attack in 2012 (on Leap Year Day). Still, the surviving trio kept the Monkees alive not just as a memory, but as a functional band; Dolenz, Tork, and Nesmith toured in 2012, 2013, 2014, and 2015. In 2016, Dolenz and Tork not only toured to commemorate the band's 50th anniversary but released a new album, Good Times!, which was produced by Fountains of Wayne's Adam Schlesinger and included new songs by Rivers Cuomo, Noel Gallagher, Andy Partridge, Paul Weller and Ben Gibbard. Nesmith appears on the album, but wasn't able to tour due to being busy writing his memoir Infinite Tuesday: An Autobiographical Riff. He Skyped in to the band's June 1, 2016 show

to do a song and joined the band in person for two more shows, one of which he announced beforehand as his final appearance with the group. However, Nesmith and Dolenz toured together as the Monkees in 2018 (this time, Tork sat out due to health problems and to work on a new solo album). That year, the band released another new album, a Christmas record called Christmas Party. This turned out to be the last release with Tork, who died of cancer in February 2019. Dolenz and Nesmith toured as the Monkees in 2019 and planned a tour in 2020 that was delayed by the COVID-19 Pandemic; during the delay, they decided that the postponed tour would be their last. The farewell tour finally started in September 2021 and ended November 14 at the Greek Theater in Los Angeles. It turned out to be the ultimate swan song for Nesmith as well, as he passed away less than a month later, leaving Dolenz as the last living member of the group. Shortly after Nesmith's passing, Dolenz announced that The Monkees were finished as a band; any of his future performances will be by "Micky Dolenz of The Monkees". However, thanks to all this late career activity, along with the quality of their work, the Monkees' popularity and artistic legacy have remained strong to this day and will likely endure into the foreseeable future.

In 1987, in the wake of the publicity drummed up by the Pool It reunion, Columbia Pictures assembled a group of musicians called "New Monkees". They starred on an eponymous syndicated TV show, but it only lasted 13 episodes. Their sole album wasn't a success at the time either, although it has developed a following.

The TV show is on this page. Head and the trivia game Monkees Equals Monkees also have pages.

The Monkees were conceived as an ultra-fluffy version of the Beatles, a fact not unnoticed by observers at the time given that the group gained the disparaging nickname "The Pre-Fab Four."

Example of:
Borrowing the Beatles

The Monkees were conceived as an ultra-fluffy version of the Beatles, a fact not unnoticed by observers at the time given that the group gained the disparaging nickname "The Pre-Fab Four."