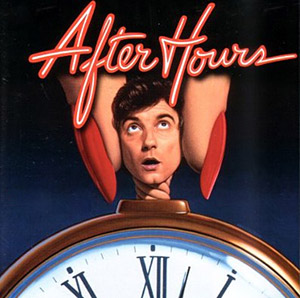 A 1985 Black Comedy by Martin Scorsese. To date it's Scorsese's only 'pure' comedy and a very dark one too.
Advertisement:

The movie takes place in New York City over the course of one night. Unhappy office drone Paul Hackett (Griffin Dunne) meets a beautiful girl in a cafe and ends up calling over at her place in SoHo. Things work out badly and he ends up leaving hurriedly. The remainder of the movie chronicles his attempts to get home and the often surreal obstacles he faces.

It was the second of three somewhat similar movies in which a milquetoast guy meets a very worldly girl, with things then taking a turn for the dark, preceded by Into the Night earlier in 1985, then followed by Something Wild in 1986, starring Jeff Daniels, Melanie Griffith and Ray Liotta.