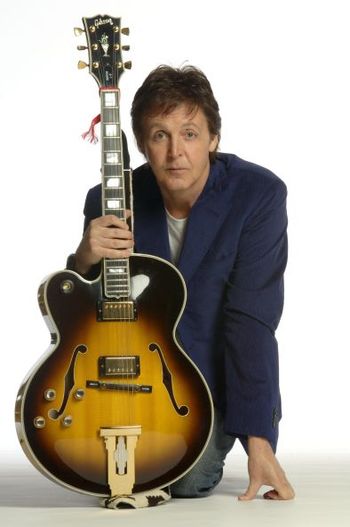 Still the Cute One.
Reporter: I'd like to direct this question to messrs. Lennon and McCartney. In a recent article, Time magazine put down pop music. And they referred to "Day Tripper" as being about a prostitute, and "Norwegian Wood" as being about a lesbian. I just wanted to know what your intent was when you wrote it, and what your feeling is about the Time magazine criticism of the music that is being written today.
Advertisement:
Paul McCartney: We were just trying to write songs about prostitutes and lesbians, that's all.
— 1966 interview

Sir James Paul McCartney, CH MBE (born 18 June 1942) is an English musician who gained worldwide fame as co-lead vocalist and bassist for The Beatles. His songwriting partnership with John Lennon remains the most successful in history.

McCartney began his career as a member of the band The Quarrymen in 1957, already a skilled songwriter and multi-instrumentalist, which evolved into the Beatles in 1960. Starting with the album Sgt. Pepper's Lonely Hearts Club Band (1967), he gradually became the Beatles' de facto leader. His songs with the Beatles "And I Love Her" (1964), "Yesterday" (1965), "Eleanor Rigby" (1966) and "Blackbird" (1968) rank among the most covered songs in history. Along the way, despite his innocuous, sentimental reputation, he helped also create one of the earliest examples of Heavy Metal with "Helter Skelter."

Shortly before the Beatles disbanded in 1970, McCartney debuted as a solo artist with the album McCartney. The following year, he released Ram and formed the band Wings with his first wife, Linda. After leading Wings throughout the 1970s, McCartney resumed his solo career in 1980.

Beyond music, he has been known for promoting subjects such as vegetarianism and donating to charity, and arguing against others such as animal cruelty/hunting, land mines and fracking.

Studio Discography (McCartney's discography with The Beatles and Wings are on those bands' pages):