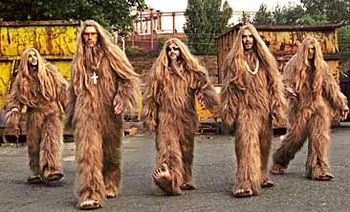 SFA OK!
"Wouldn't it be nice to know
What the paper doesn't show
What the TV doesn't say
Or what my hamster ate today"
— Super Furry Animals, "God! Show Me Magic"
Advertisement:

Super Furry Animals are a Psychedelic Rock band that formed in Cardiff, Wales in 1993. Their music blends elements of rock, psychedelia, electronica, and just about everything else in between, often containing lyrics which toe the line between goofy and surreal to deeply profound and philosophical.

Aside from their distinct sound, the group also gained notoriety for their bizarre publicity stunts, such as travelling to festivals in a decomissioned tank (which they then sold off to Don Henley of The Eagles), getting a song that features the word 'fuck' being repeated 50 times into the top 40 (a record which they broke again a few years later), and recording a whole album of songs in their native Welsh. Their record sleeves, mostly designed by Cardiff-based artist Pete Fowler, are equally insane.

Rhys Ifans was the band's original vocalist, but left before the group signed a record deal to focus on his acting career.