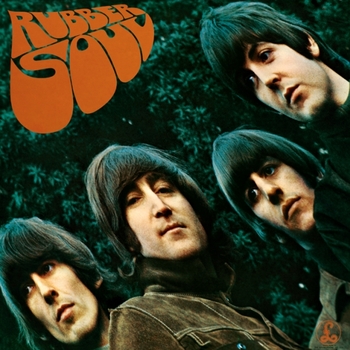 "I once had a girl, or should I say, she once had me..."
"Rubber Soul is the Beatles' first step into the mystic and, although subsequent albums seemed to extrapolate these visions much further, the insight—and cutting social comment—showed that the group had ditched the jelly babies forever....It was obvious that the group were no longer concerned with their public image as 'lovable mop tops' etc. They were Artists and, like Artists, they wanted things done their way (for the sake of the Art). Rubber Soul was."
— Roy Carr & Tony Tyler, The Beatles: An Illustrated Record
Advertisement:

Rubber Soul is the sixth studio album by The Beatles, released in December 1965.

As the page quote describes, the album marked an important step forward in the group's artistic development, as they began to shed their early image as the innocent, fun-loving "Fab Four". From the stylish cover art (which didn't even have the band's name on the front) to the introspective, poetic, often bitter lyrics, the Beatles were taking their music to the next level. Indeed, Rubber Soul's innovations led directly to Revolver (1966) and Sgt. Pepper's Lonely Hearts Club Band (1967). Such tracks as "Drive My Car", "Norwegian Wood", "In My Life", "Michelle", "Nowhere Man", and "Girl" became huge international hits.

In my life, I've troped them all: