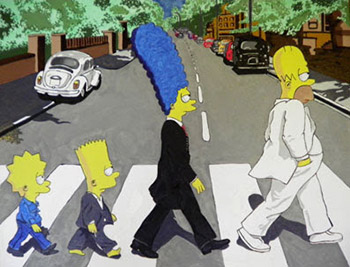 The cover for The Beatles' album Abbey Road is an image that is instantly recognizable. Four people (usually), belonging to the same group, cross a road single file. If the author is really showing their work, they will be crossing to the right, in this sequence: dressed in a white suit, dressed in a black suit, dressed in a dark blue suit, and entirely in blue denim. Whomever is third in line will be barefoot and walking off-step from the others (and, for extra points, will be holding a cigarette or pencil in their right hand). The one in front wearing white will have their hands stuffed in their pockets. For bonus points, there will be a 1960s Volkswagen Beetle and a man walking a dog in the background.

Often used as a cover or poster. Expect long-running bands to use it sometime in their career.

Movies or episodes discussing long-gone Glory Days of a Bob & Alice's band will often feature this pose as well.

For some collections of these images (some better than others), go here,

to see people disrupt traffic for their own personal recreation. Make sure you go to the right Abbey Road in London - the DLR station is several miles away (although TFL have produced a Pun-laden poster

◊ there directing you to the right place in St. John's Wood).

Sgt. Pepper's Shout-Out is another trope based on parodies of a specific Beatles album cover. Borrowing the Beatles are parodies of the band itself.