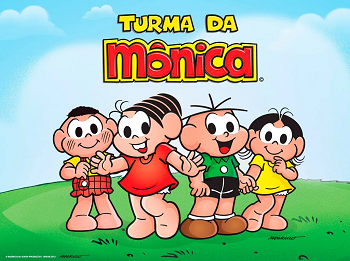 Monica's Gang, also known as Monica and Friends (originally titled Turma da Mônica) is a hugely popular Brazilian comic book series that has been running since the 1960s. It was created by Brazilian cartoonist Mauricio de Sousa.

The series has countless comic books, strips and almanacs, and is divided in several branches. The main one features four main 7-year-old kids and takes place in São Paulo:

The other groups created by Maurício include:

. The English dub of the series on the Monica Plus YouTube channel can be found here

. The playlist of the Japanese dub of the show can be found here