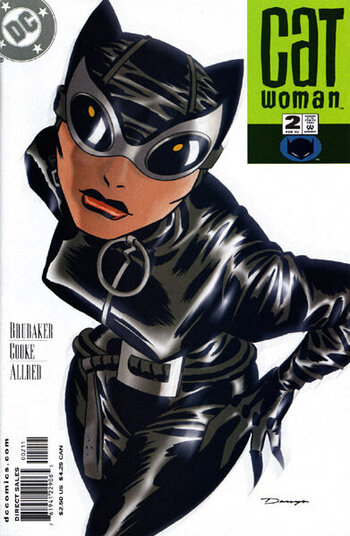 The cover to Catwoman vol 3 #2 by Darwyn Cooke.
The DC Comics character of Catwoman has had five self-titled series so far:
Advertisement:

Catwoman Vol 1 (1989) was a four-issue mini-series written by Mindy Newell, with art by Joe Brozowski. It retells Catwoman's origin story, this time incorporating Frank Miller's Batman: Year One where Selina Kyle was a prostitute. Deciding that she's had enough of her abusive pimp Stan and inspired by the recent appearance of the Batman, Selina Kyle decides to don a costume of her own to get some payback.

Catwoman Vol 2 (1993-2001) was a series primarily known for long-running artist Jim Balent, who drew the book from 1993 to 2000, for over 75 issues. Over the years, the book had writers such as Jo Duffy, Doug Moench, Chuck Dixon, Alan Grant, Devin Grayson, John Ostrander, and Balent himself. The series continued the story of Selina Kyle, but this time in the present day and it intersected with the rest of the Bat-books and the wider DC Universe, having tie-ins to Knightquest, Zero Hour: Crisis in Time!, Underworld Unleashed, Cataclysm, Batman: No Man's Land, and more. It lasted a total of 94 issues and four annuals.

Catwoman Vol 3 (2002-2008) was Catwoman's second ongoing series and was mainly known for the complete costume redesign done by Darwyn Cooke and the intricate noir storylines by writer Ed Brubaker. Cooke would leave after four issues (although he would later write and draw Selina's Big Score, which he regarded as his favorite book), while Brubaker stayed on the book until issue 37. Selina would temporarily retire after the Time Skip of "One Year Later" due to having a baby, with Holly Robinson taking over the role of Catwoman, although this wouldn't last of course. The book would tie-in to Batman: War Games, Amazons Attack!, and Salvation Run. It would last for 82 issues (although it would be revived for another issue for Blackest Night).

Catwoman Vol 4 (2011-2016) was Catwoman's New 52 series. Initially written by Judd Winick, with art by Guillem March, it got off on the wrong foot with controversy over the ending of issue one: Catwoman and Batman having sex on a rooftop. After Winnick left, the book was written by Ann Nocenti and then Geneveive Valentine. Valentine's run came during Batman Eternal and the revelation that Selina was the heir to the Calabrese crime family, with Selina trying to becoming the new kingpin of Gotham crime while still maintaining her morality. The run also revealed Selina to be bisexual, as she was involved in a romantic relationship with Eiko, the new Catwoman. After this, Frank Tieri would take over for the remaining issues, with Catwoman going on the run. The book would tie-in to Night of the Owls, Death of the Family, Batman: Zero Year, and Futures End. It would last for 52 issues and 2 annuals.

Catwoman Vol 5 (2018-ongoing) is Catwoman's post-DC Rebirth series. Spinning off from Batman (Tom King), after the disastrous non-wedding, the series was initially written and drawn by Joëlle Jones. In it, Catwoman decides to move to Villa Hermosa and uses it as her base of operations for a short time. After Jones left the book, writer Ram V took over with issue 25, returning Selina to being the protector of Gotham's East End, specifically Alleytown, this time taking over a gang of street urchins named the Alleytown Strays and gaining an apprentice named Shoes. The book has tied-in so far to The Joker War and is still ongoing.