Comic Book / Night of the Owls 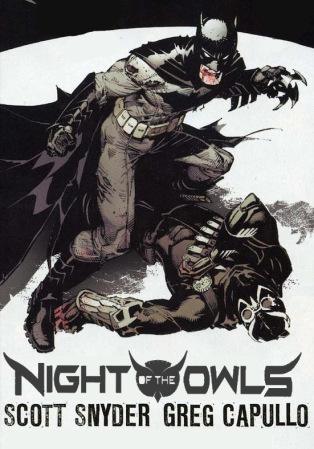 Who will rule the darkness in Gotham?
"Beware the Court of Owls that watches all the time.
Ruling Gotham from a shadowed perch, behind granite and lime.

They watch you at your hearth, they watch you in your bed.
Speak not a whispered word of them, or they'll send the Talon for your head."
— Court of the Owls nursery rhyme
Advertisement:

The Court of Owls and Night of the Owls is a major comic book story arc set in the DC Universe following the launch of the New 52. Written by Scott Snyder and penciled by Greg Capullo, the arc is a major crossover event, although the main story is told in the Batman comics. The story pits Batman against an ancient cabal, the Court of Owls, as they attempt to cement their control over Gotham City, which they have been manipulating in secret for centuries. As described by writer Kyle Higgins, the series is the follow up to Batman: Gates of Gotham and divulges more of the history of Gotham before the turn of the century, with Gates of Gotham having been originally intended to be a precursor to Night of the Owls. The crossover has been described by writer Scott Snyder as the first story arc of the Batman trilogy that he is planning. According to Snyder, in terms of internal chronology, Night of the Owls takes place in a single night (although its buildup, The Court of Owls, is at least eight days long).

For the most part, the story arc takes place in Gotham City, renamed the City of Owls as the Court begins its full-out attack. However, the overreaching story arc also takes place in Wayne Manor and the outskirts of Gotham. Such cities as Chicago, Miami, and New Orleans are featured prominently as well.

The stories are covered in the following issues:

This comic was one of the most successful storylines of the New 52 both critically and financially. The aftermath of the storyline would affect a number of series, among them Birds of Prey who'd recruit a Talon in the aftermath as a team member. Ramifications of this storyline continue in the post-New 52 Batman landscape, such as Dark Nights: Metal.