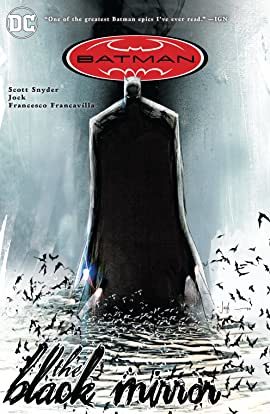 The Black Mirror is the first Batman story by Scott Snyder.

Written pre-New 52, The Black Mirror stars Dick Grayson in his closing days as Gotham's Batman. While the newly returned Bruce Wayne is busy developing Batman Inc elsewhere, Dick has developed a new crime lab for the GCPD and James Gordon in particular to use. Simultaneously, he is continuing to fight crime as Batman with the technical support of Red Robin, Oracle, and Jim Gordon.

The Black Mirror was published in the pages of Detective Comics and was so acclaimed that Snyder was moved to the main Batman series following the New 52 reboot.

The Black Mirror contains examples of the following tropes: