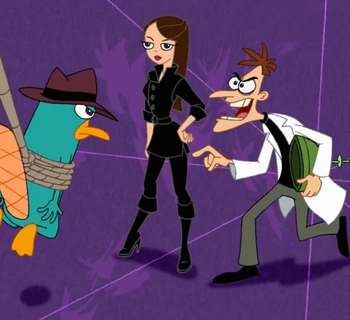 As you can see, she took after her mother.
"He's a mad scientist and I'm his beautiful daughter."
— Deety Burroughs opening line, The Number of the Beast by Robert A. Heinlein
Advertisement:

A Mad Scientist has only one child — a beautiful but innocent girl in her late teens or early twenties, who loves her father dearly, and whom he has kept cloistered away from the world. Sometimes she has some small doubts about his goals or methods.

When the question of how a shriveled ugly man has a gorgeous daughter comes up, the response is either that she looks like her mother, or that the father did look as attractive as his daughter when he was younger.

When the Mad Scientist is a good guy, the Daughter is not nearly so cloistered, although she is still a prime candidate as a love interest. Sometimes she ends up The Chick or The Smart Girl in a Five-Man Band when a team relies on the Scientist for their Phlebotinum. This latter version is more common nowadays.

This trope is Older Than Feudalism, Medea — and many Fairy Tale heroines — being a recognizable form of it, even if it's the mad wizard's beautiful daughter.

Often overlaps with The Ugly Guy's Hot Daughter. May overlap with Daddy's Little Villain. Might also end up being a Perky Female Minion or Dark Action Girl, if she frequently helps her father in his work. Sister trope to Science Hero's Babe Assistant, where she's a love interest to the scientist rather than his daughter.