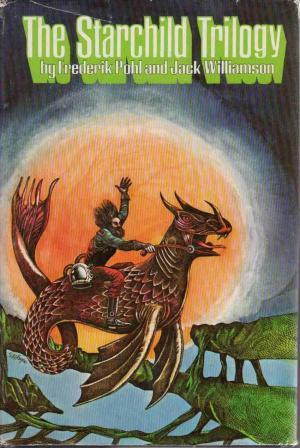 The Starchild Trilogy is the omnibus name for a series of three wildly imaginative science fiction novels by Frederik Pohl and Jack Williamson, written in the 1960s, and generally considered the best of several collaborations between the two. They were originally published separately, but most reprints have bundled the three into a single volume.

The three novels are set in the same universe, but are completely standalone and have no characters in common. They can be read in any order, but are best read in publication order, to avoid minor spoilers.

An overcrowded Earth is under control of The Plan of Man, an absolute government run by a powerful Master Computer. Steve Ryeland is a scientist, loyal to the Plan, who has been arrested for reasons he doesn't understand, and fitted with an explosive collar. Now he's been shipped to a remote facility and ordered to study a mysterious alien creature with seemingly miraculous powers of flight, which could open up the stars! Donna Creery, the beautiful daughter of the Planner of Earth, is there, furious at the way the previous researchers had been treating the beast, which she considers a pet. Steve begins his research, but a coup by an ambitious general forces Donna and Steve to flee on the creature's back to the mysterious reefs of space—a strange wonderland hidden between the stars, where an entire bizarre alien ecosystem has formed.

The Plan of Man receives a demand to leave the reefs of space alone, and free any "followers of the star" it has imprisoned. The message comes from a mysterious entity called the "Starchild", which demonstrates that it has the power to make the sun and several nearby stars turn off and back on! Meanwhile, Machine Major Boysie Gann, a loyal spy and informer for the Plan, is mysteriously transported to the reefs of space, where he encounters some of the settlers living beyond the Plan of Man, and then just as mysteriously transported back to a secure facility on Earth, where he is promptly arrested. Now he is caught between his own government, which is viewing him with deep suspicion, and powers from beyond the stars that seem to want to treat him as a plaything.

The discovery of living, intelligent stars has changed everything. Mankind is now part of a vast, multi-galaxy civilization, under the sponsorship of the living star Almalik. Andy Quamodian is a earnest follower of Almalik, who still dreams of Molly Zaldiver, the girl that got away. When he recieves an urgent message from Molly begging for help, he drops everything to try to get back to Earth, where she's living with her boyfriend, Cliff Hawk, who is performing dangerous research into the mythical creatures known as "Rogue Stars".

Tropes in this trilogy: