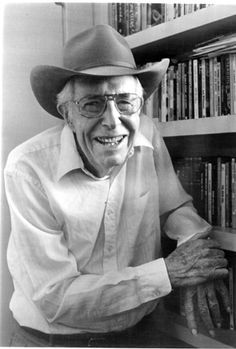 "I have a vast curiosity about our universe, our origins, and its probable future."
Advertisement:

John Stewart "Jack" Williamson (April 29, 1908 – November 10, 2006) was an early and influential American Science Fiction writer whose career lasted over seventy-five years. His first story, "The Metal Man", was published in 1928, when he was just twenty years old, and his last novel, The Stonehenge Gate, was published in 2005, when he was 97. He was a regular collaborator with Frederik Pohl; the two produced nearly a dozen novels together.

His best known solo works include The Legion of Space series, the Humanoids series, and the Seetee Ship series. His best known collaborations are The Starchild Trilogy and the Undersea Trilogy, both with Frederik Pohl.

He is credited with naming Terraforming and LEGO Genetics, and was one of the first authors to write about Antimatter. He was the second-ever recipient of the SFWA Grand Master Award, after Robert A. Heinlein.

Works by Jack Williamson with their own Tropes Pages include