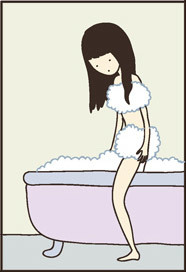 A large blob of foam, which up until that point had been performing sterling service in the cause of the essential decencies, slipped slowly to the floor.
"Well?" he snapped. "Haven't you lot seen a wizard before?" A watchman snapped to attention and saluted.
"Captain Carrot, sir. We've, er, never seen so much of a wizard, sir."
— Night Watch
Advertisement:

Much like Censor Steam, this trope is when a character is taking a bubble bath and seems to have the suds from the bath conveniently covering the private parts of their body when they get out, and also while inside of the bath. In real life this does happen, but not nearly so selectively as this trope might lead you to believe. On top of that, the suds in real life will slide off one's body and it would take a lot (as in, the tub would have to look like a root beer float or a beer that's mostly head) to cover the naughty bits completely.

If they're bathing outdoors, the character's modesty will more likely to be preserved by either Lens Flare Censor, or Scenery Censor.