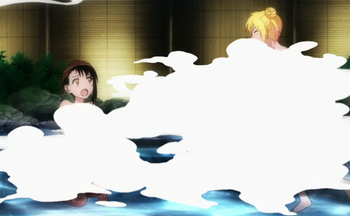 Steaming hot action, behind steaming hot... steam.
"If those wisps of smoke are meant to hide Omega Red’s 'carbonadium tentacle' in order to make sure this thing could still be approved by the Comics Code, then Arkady’s genitals are positioned in a weirdly high spot on his crotch. Congratulations: You now know more about Omega Red’s ding-dang than you did five minutes ago."
— Chris Sims on

The use of strategically placed steam or smoke to censor the "naughty bits". Used most often in Anime, but also in Western Animation. Its use in Live Action is rarer, as real smoke is hard to control, and is often transparent. Most recently, Censor Steam can also be seen in the form of glimmering rays of light, or black shadows.

In recent years, many shows are marketed with explicit intent to be released on DVD, and for anime one of the best incentives to encourage people to buy is, literally, Fanservice. However, many broadcast networks have particular policies against sexually explicit content (as opposed to direct sale via DVDs, which has none).

Thus the cheapest way to fulfill both needs is not to redo animation just to include Fanservice, but broadcast it initially censored. For many series, fans became suspicious that this was done intentionally merely to get them to pay up.

A Bonus Episode meets the two ideas in the middle.

Coined from the preferred censorship tactic of the fanservice anime Girls Bravo, which often obscured entire scenes until the second season premiered on another network.

The comedic version is usually Relax-o-Vision.

A similar phenomenon is noted in more recent U.S. superhero comics, and is most strongly associated with the X-Men character Storm.

Another related trope, in which the naughty bits simply aren't drawn at all, is Barbie Doll Anatomy.