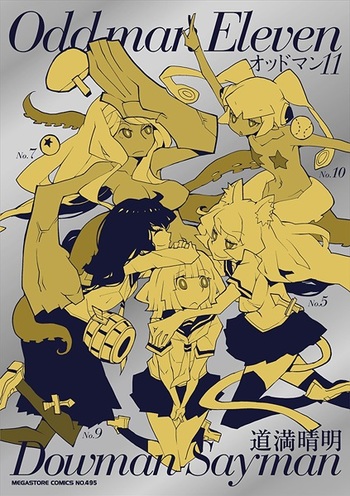 At a high school in Kobata City there exist 11 individuals called Oddmen, ten girls and one boy who all possess certain unusual physical abnormalities or unshakable mental compulsions, whether it's being a lifetime nudist, a sex-crazed Cat Girl, an intimidating sadist or an anthropomorphic dog, canine instincts and all. Seemingly normal schoolgirl Setsu is interested in going out with Itami, the sole male Oddman, but after learning that he's exes with 9 of the other Oddmen and currently in a relationship with the last (who just so happens to be his sister), she's convinced to defeat all the other Oddmen to earn the right to go out with him, just like in that movie. As she defeats the Oddmen, though, they each end up forming a circle of friends around her, until she ends up accidentally creating her own all-girl harem.

Created by Dowman Sayman, the creator of The Voynich Hotel, the manga is effectively Scott Pilgrim as a gender-flipped raunchy lesbian sex comedy. Sexual and Toilet Humor humor abound, as well as plenty of bizarre situational comedy, though these are occasionally juxtaposed with some surprisingly heartfelt moments and even moments of horror.