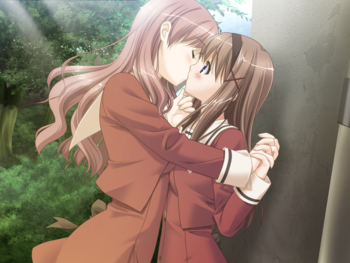 Since homosexual men are called "gay," homosexual girls should be called "ecstatic".
"Yuri is a blessed thing. The refined and subtle actions, the warmth, of a world where only girls reside...yet also the pain of interpersonal politics and selfish intrigue. And finally, those strong emotional bonds before which no hardship is an insurmountable obstacle. Verily, a finely-honed mental and spiritual realm for transcending the crude conceptions of the male mind!"
— Hanadera Keisuke, Yuri Danshi