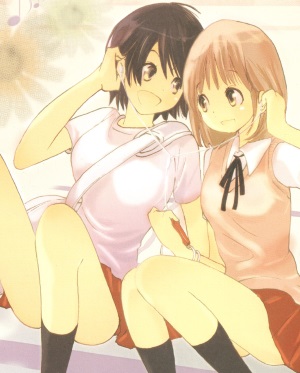 Yamada is an ordinary girl who isn't particularly popular, smart, or pretty. One day, when she's watering the plants beside the track team's practice area, sports star Kase passes by and shares a cheerful word. From that day on, Yamada is besotted with her, and watches her crush from afar. Before long, they meet again and Kase ends up saving her from an embarrassing situation. Then, when she glances at Kase in the changing rooms, and sees Kase watching her, she can only blush and look away.

So begins a gently-paced story exploring the relationship between the two girls: whilst Yamada doesn't understand why she has such feelings for another girl, she knows that, more than anything, she wants Kase to be in love with her.

She'll have to wait a little longer, though. Soon after, Kase strikes up a conversation, expressing a desire to see her over the Summer break. During the holidays and the following term, Kase and Yamada continue to meet. As their friendship deepens, they tentatively and shyly explore the idea of being more.

Kase-san (or Asagao to Kase-san —Kase-san and Morning Glories—) is a W.A.F.F.-style / iyashikei Yuri Genre manga by Takashima Hiromi that began as a one-shot in 2012, but turned into a multi-volume series, which came to a close in March 2017. Seven Seas Entertainment is releasing the series in English.

The Sequel Series, titled Yamada and Kase-san, began in April 2017 and follows the title characters' new college life in Tokyo.

An official hour-long OVA animated by Zexcs began premiering in Japanese theaters on June 9th, 2018. It will be released by Sentai Filmworks with an English dub on October 2019.