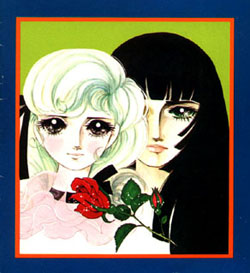 Shiroi Heya no Futari (白い部屋のふたり, Our White Room or Couple of the White Room) is the first Girls' Love manga. It was written by Ryoko Yamagishi, one of the Year 24 Group (a collective of manga artists who revolutionized Shōjo manga), during The '70s, and is the source of many common Girls' Love tropes. The manga ran for four chapters in the shoujo magazine Hana to Yume in 1971.