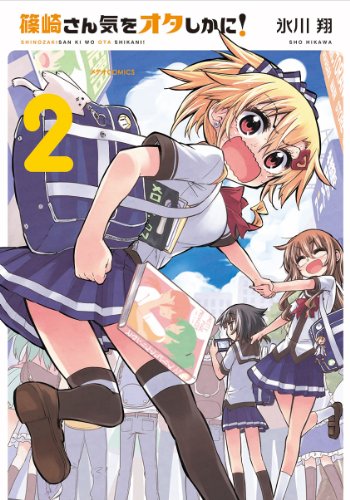 I don't read Yuri Manga! I...I'm just holding that for a friend!
Advertisement:

Shinozaki-san Ki wo Ota Shika ni! ("Don't become an otaku, Shinozaki-san!") is a manga by Shou Hikawa, which was serialized in Comic Meteor from 2012 to 2017 and compiled into nine volumes.

In middle-school, with her beautiful looks and outgoing personality, Akina Shinozaki used to be the leader of a group of hotties at the top of her class hierarchy. However, after her high school debut is delayed by a week due to a cold, she finds herself the odd person out as all her classmates have already formed their cliques.

Sitting next to her is an otaku girl, Kaede Sasamura, whom she immediately dismisses as a freak, but when Akina later bumps into her, knocking her glasses off, Akina is dumbstruck when she realizes Kaede is actually very beautiful. Puzzled by why Kaede chose the life of an otaku and feeling that it's a tragic waste, Akina decides to save Kaede from the disgusting life-choice by introducing her to fashion and grooming her for a perfect high school life, but the only way to get close to Kaede is for Akina to pretend to be an otaku herself, much to her chagrin.

Still, she'll do whatever it takes to save Kaede from the otaku lifestyle, as soon as she is done watching some Prepure, cosplaying, playing videogame and table top RPG's, reading gay and lesbian Doujins, going to anime conventions, creating a maid café, writing Fanfics, and fantasizing about alone time with Kaede... wait, what was she supposed to be doing again?