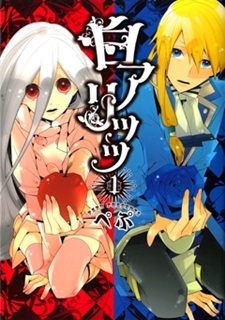 Shiro Ari (or Snow White and Alice) is a shoujo manga series by Pepu, which was serialized in Sylph from 2010 to 2016.

Though she is feared, scorned, and bullied by others for being a "demon child" due to her white hair and red eyes, Snow White strives to do good in hopes that her efforts will gain their friendship one day. Her only seeming companion is Mirror, who is asked day after day by Snow White's "Mother" (or employer) if she is the Fairest of Them All.

One day, Mirror speaks his mind and blatantly claims that Snow White is far more beautiful than her, which seemingly forces him to transport Snow White (for her own protection) from her world to another one where everything is the opposite of what they seem. Words are written backwards, and signs point to the opposite direction that it says.

According to Mirror, the only way for Snow White to return to her realm is to "make Alice the king."

However, this proves to be easier said than done when the amiable Alice is anything but.