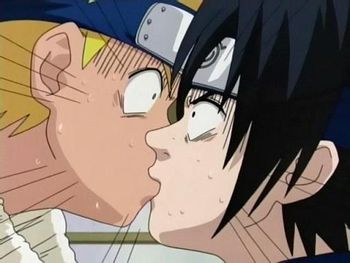 Cue fangirl Squee!
"How do you accidentally kiss someone? Did she slip on a rug, and your lips broke her fall?"
— Topanga Lawrence, Boy Meets World
Advertisement:

Nothing can be simultaneously more embarrassing and more exciting than the Accidental Kiss, especially if it's also a First Kiss or Sacred First Kiss. Tends to occur in three forms:

This trope actually occurs in Real Life, only not to the same extent as it is shown in fiction. Can turn into a Gay Moment. Compare and contrast Platonic Kissing, which is on purpose but doesn't have any romantic intent.

A stumble causes Gabby and Westley to accidentally kiss!

A stumble causes Gabby and Westley to accidentally kiss!