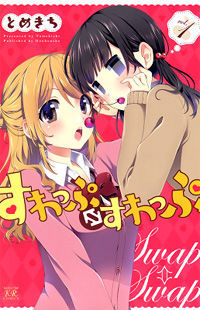 Natsuko is on the left, and Haruko is on the right. For now...
Swap ↔ Swap is a comedic Yuri manga by Tomekichi that runs in Manga Time Kirara Carat. It stars two schoolgirls, the popular and beautiful Nikaido Natsuko, and the shy yet brilliant Ichinose Haruko, who learn that they can switch bodies by kissing.