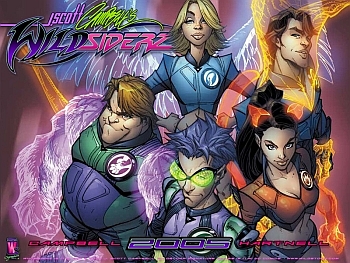 Wildsiderz is a comic book series created by J. Scott Campbell and Andy Hartnell, and published by WildStorm Productions. It is the second series created by Campbell and Hartnell after their successful Danger Girl. It features a group of teenagers who, through newly developed holographic technology, can take on the powers of animals to fight a mad scientist.

It was originally planned as a five-issue limited series (six, if issue #0 is included). Issue #2 was the last issue, released in November 2005. Issue #3 was originally set for release on April 19, 2006, but has been delayed. Neither Wildstorm nor Campbell has given any official comment for the delay. No word was ever given as to whether it was canceled or delayed. DC/Wildstorm no longer promotes it as part of its Web site.

Derek Styler — A skateboard fanatic, computer genius, and insect freak, Styler helped create the holographic technology used by the Wildsiderz. His holographic "wildside" is the dragonfly, which allows him to fly at hypersonic speeds, see with 360-degree vision, and fire blasts of energy from his "tail".

Jessica "Jess" Jennings — Styler's best friend (though she wishes he would see her as a girlfriend), Jess is a volunteer at an animal refuge. She is the teams resident animal expert. Her "wildside" is the eagle, which allows her to fly at amazing speeds (she has yet to find her top velocity) and grab or shred objects with her foot talons.

Katrina "Kat" Summers — Head cheerleader, Kat was actually a little clumsy, and wanted the Wildsiderz power to help her in her acrobatics. Her "wildside" is the panther, which gives her amazing agility, incredible balance, deadly claws and superhuman hearing.

Zachary "Zak" Hamilton — The resident all-star athlete, Zak is a football player and Kat's boyfriend. He had Styler use data taken from a special effects studio to create his "wildside", the velociraptor, which gives him incredible running speed, slashing talons, and a powerful bite.

William "Bam" Boome — A big burly jock with more muscles than brains, Bam is Zak's best friend. He loves to eat and party. His "wildside" is the gorilla, which gives him superhuman strength and dexterity.

Mirra Martin — The super-genius who helped Styler create his holographic tech, Mirra used a wheelchair, until she used the holographic tech to restore her ability to walk. She has no "wildside", but has a pair of hard-light holographic "legs" which are superimposed over her real legs, enabling her to walk, run or jump better than an Olympic athlete.

Janyne — Tyberious' assistant and bodyguard. She was given Wildsiderz tech to better serve her boss. Her "wildside" is the mantis, which gives her lightning-fast reflexes and sword-like pincers.