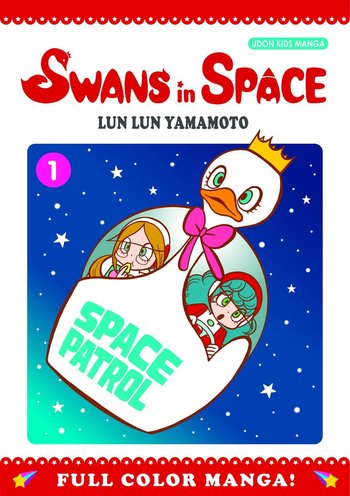 Lan and Corona on the clock.
Advertisement:

Uchuu no Swan (translated in America as Swans in Space) is an obscure manga written and illustrated by Lun Lun Yamamoto. It has three volumes and ran from 2006 to 2007.

The story centers around Corona Hoshino, a sixth-grade student at the Cosmos Institute. She's the Class President, is on the honor roll, and generally performs well within school. One day, she crosses paths with Lan Tsukishima, who is quiet, reserved, and a huge fangirl of Space Patrol, a Show Within a Show aimed towards young children. Unfortunately, Lan's spacey attitude gives her a reputation as the "weird" girl, which causes most people to either avoid or make fun of her.

On that fateful day, Corona sticks up for Lan when a pair of boys make fun of her interest in Space Patrol. When Corona follows around Lan in an attempt to cheer her up, Corona tries to cheer up Lan by saying positive things about Space Patrol. In turn, Lan gives Corona a Space Patrol-brand watch as a gift.

That night, Corona is mulling over the watch when suddenly, it teleports her to a strange simulation room. From there, Corona discovers that Space Patrol isn't just a Show Within a Show, it's real! The exploits of the Space Patrol members are real, and the TV show is a dramatization of their missions. Aided by their instructor (named Instructor), Corona and Lan must work together as employees of the Space Patrol Earth Division.

Tropes relating to Swans in Space: