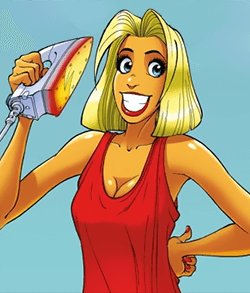 That's...not how you iron hair, but you do you.
"You may think I'm just a pretty blonde, well, in this case, what you see is exactly what you get! Blondes are dumb as [honk]!"
— Sailor Venus, Sailor Moon Abridged ep. 50
Advertisement:

The stereotypical assumption is that blondes are dumb. These characters fit it. Perhaps no more than a Foil to the Brainy Brunette, but can also appear as The Fool, The Ditz, or even the Brainless Beauty. Extreme cases can make her the Cloudcuckoolander. Her character is otherwise flexible; the Dumb Blonde ranges from a Love Freak, to a sweet, wholesome blonde whose lack of interest in education only shows that she is more concerned about people, to a vacuous, mean-spirited and often lazy bimbo, or less often to The Vamp.

The Dumb Blonde may be less worldly-wise, or she may have decided to skate through life on her looks, leaving intellectual pursuits to her darker-haired counterpart because she does not want to spend the effort to cultivate her mind. It may even be a deliberately cultivated act, to appear in need of help before men. Whatever the reason, she tends to be scatter-brained and lacking in common sense.

While the trope is Older Than Steam, it really started to become popular in the 1940s and '50s with comic books, radio, and movies cementing the idea of the pretty but foolish blonde.

Very prone to subversion now, with the characters who assume the blonde is foolish paying for it dearly. This may be a form of Obfuscating Stupidity, with the blonde playing off the stereotype, or she may have both strengths and weaknesses, and the blonde hair causes characters to overestimate the weakness and underestimate the strengths. Some works of fiction also play with this trope by splitting it into two subtypes: type 1 is Book Dumb, while type 2 is book smart, but lacks common sense.

Oddly enough, this trope seems to apply to bottle blondes more than natural ones. Perhaps dyeing her hair is a sign of her natural shallowness, or it's one of the ways that she tries to get out of doing any thinking, studying, or other action to develop her mind. This is sometimes referenced by another character who asks, "Has all that hair dye you use finally seeped into your brain?"

When the blonde is innocent rather than stupid, that's Hair of Gold, Heart of Gold. If the blonde is also very strong, then this takes on a Brains Versus Brawn dynamic, especially if the Brainy Brunette is there as a contrast or in a Brains and Brawn duo. When the blonde is sexy rather than stupid, that's Everyone Loves Blondes. If she is sexy and stupid, she's a Brainless Beauty. And if she's in a Four-Temperament Ensemble, she's probably Sanguine. Bonus points go to Dumb Blonde characters who aren't real blondes. Especially watch out for a Ditzy Genius or a Modern Major General.

Not quite Always Female, but almost so.

Because not every blonde person you come across is an idiot, No Real Life Examples, Please!

You have to be this unintelligent to believe in SNASA and the Smoon.

You have to be this unintelligent to believe in SNASA and the Smoon.