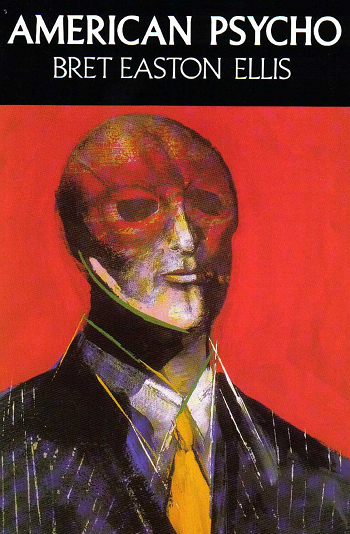 "There is an idea of a Patrick Bateman, some kind of abstraction, but there's no real me, only an entity, something illusory."
— Patrick Bateman
Advertisement:

American Psycho is a novel by Bret Easton Ellis first published in 1991. It is the story about the archetypal '80s businessman: rich, shallow, unhappy, self-absorbed — and a sociopathic serial killer.

Patrick Bateman is a yuppie's yuppie. He works on Wall Street, has a pretty girlfriend, and spends most of his life in trendy restaurants and clubs. However, he is also a psychotic killer who often hallucinates and murders people in increasingly horrific ways, often over the most trivial of provocations or for no reason whatsoever.

Most of the people in Patrick's life don't really know anything about him — but then again, he doesn't know anything about them, either. Most of the people he knows can't even be bothered to remember his name — but he isn't so sure about their names, either, so it all evens out. There is no one who listens to him; he confesses at least once a week, but no one seems to notice or indeed care. And Ellis explains that Patrick may not really be a serial killer. He may just be harmlessly insane. Or bored. Or even both. But he may also be speaking the absolute truth. It's up to the reader to decide.

The book also crosses over with Ellis's earlier novel The Rules of Attraction, but like everything else, it's of no consequence whatsoever. The main character Patrick Bateman also makes appearances in his later books Glamorama (1995) and Lunar Park (2005).

In addition to spawning a film and a musical, the novel also inspired the song and album title of the same name from The Misfits. Not to be confused with the song by Canadian rock band Treble Charger or the experimental track by John Zorn on Radio.