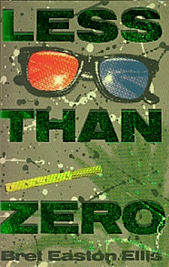 Bret Easton Ellis' first novel. Less Than Zero was written when Ellis was 19 and was published in 1985. It was loosely adapted into a film in 1987.

Clay, the protagonist, is a bisexual college student back home in L.A. for the winter break. He comes from a pretty rich family and during the course of the novel, goes to a lot of parties, has a lot of one-night stands and does a lot of drugs. The story itself is a fairly frightening take on the amorality of the 1980s party scene. In 2010 Ellis published a distant sequel, Imperial Bedrooms, which picks up Clay's story twenty-five years later.