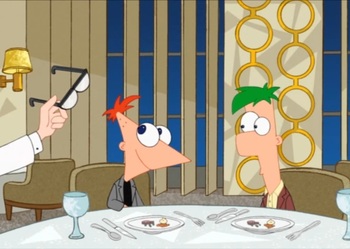 The main course, and some glasses to actually see it
"I'm not sure I like this future of cooking..."
— Sanji, This Bites!
Advertisement:

Haute cuisine or grande cuisine; the food of the wealthy people, the cuisine of "high-level" establishments, gourmet restaurants and luxury hotels. Haute cuisine is characterized by the meticulous preparation and careful presentation of food at a high price.

And in fiction, often the source of ridicule, with humor usually focussed on one or both of the following aspects:

City People Eat Sushi used to be an example of this back when sushi was considered exotic, weird, and expensive by westerners, but since The '80s sushi has become popular amongst all demographics. Molecular gastronomy serves as a go-to modern example, due to its use of specialized equipment and its tendency to render ingredients into unrecognizable and confusing forms.

This trope often overlaps with Conspicuous Consumption when it involves rare or expensive ingredients, exceptional technical expertise from the chef, or loads of time and effort — regardless of whether it actually produces a palatable meal. Often, it only has the appearance of those things, revealing the diners' pretentiousness.

Frequently involves a Stock "Yuck!" and a Formal Full Array of Cutlery.

Compare to Wine Is Classy, Hollywood Cuisine, and French Cuisine Is Haughty, food stereotypes which might appear alongside this trope. See also Alien Lunch and Foreign Queasine, where unappealing dishes come from a strange place of origin; Snooty Haute Cuisine, where the focus is on the wealth and high standards of those who can afford it; and Exotic Entree, where they're a sign of evil rather than wealth and taste.