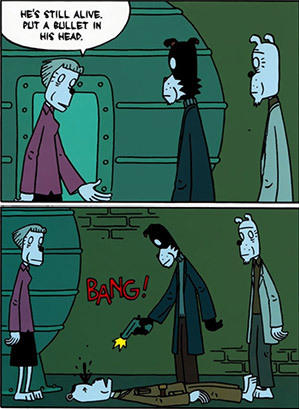 "The second rule for surviving Zombieland: The Double Tap. In those moments when you're not sure if the undead are really dead-dead, don't get all stingy with your bullets..."
— Columbus, Zombieland
Advertisement:

An amateur only shoots once. A professional always shoots twice. A subtrope of Boom, Headshot!, this is usually the difference between a sniper and a more up close and personal silenced pistol assassin. Better safe than sorry, after all. The Double Tap seems like overkill, but in both real life and in fiction it is an example of pragmatism. It's rare that the target survives a shot to the heart or brain, but it happens, and there's nothing like someone surviving their attempted killing to ruin your carefully laid plans. Similarly, there have been occasions where despite shots to the chest or head, people have continued to be coherent and capable of retaliation for some time thereafter. Some training methods insist on at least two shots to the torso and one to the head, a technique known as the Mozambique Drill. Being shot in any vital organ is bad but being shot twice in one is worse. Two to the head tend to be just as effective... Usually.

Usually shown as a portrayal of a professional making sure the target is dead or will be in short order. Expect at least two shots to the head or chest from said professional. Thorough professionals may be depicted putting two in both the head or chest. (In case of film or TV, the target may vary depending on the rating of the show in question as naturally a headshot will be far more gory than a torso shot; if someone is double-tapped in the head, it's usually shown from a distance or not actually shown on screen at all.)

Sometimes used to show a tough enemy or monster really is dead by shooting them twice in the head or chest to make sure they stay dead. Anyone worth shooting once is worth shooting at least twice.

Compare Multiple Gunshot Death. Contrast Once Is Not Enough. Compare and contrast Coup de Grâce and Kick Them While They Are Down, which is similar in confirming a kill but usually is seen as having more negative connotations. Naturally, this trope is what happens when Instant Death Bullets are not a thing.

Having previously lost his brother to another seemingly dead Kaiju, Raleigh decides to err on the side of caution.

Having previously lost his brother to another seemingly dead Kaiju, Raleigh decides to err on the side of caution.