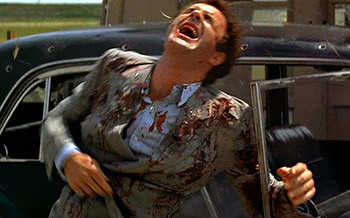 When someone or something needs to be killed Deader Than Dead, and their death needs to be particularly brutal (or in some cases, well-deserved), sometimes this problem will be solved by a handful of attackers emptying their guns into the target — in some cases involving larger guns, they may even be shot to pieces.

This trope is usually about quantity, not quality, so in the event that only one person is around to do the job, expect to see them wielding handguns or a machine gun. However, shotguns and the like are often used for dramatic effect.

Expect the victim to flail and twitch dramatically (or hilariously) with each new wound. The amount of blood shown is directly dependent on the work's rating or amount of Narm needed. Sometimes, the shooter would continue firing at the corpse to Make Sure He's Dead.

Sister Trope to Double Tap and No-Holds-Barred Beatdown, and a Sub-Trope of There Is No Kill Like Overkill. Compare and contrast with Rasputinian Death, which often involves multiple fatal factors, Double Tap, when a more measured (and well-aimed) version of this is performed (or recommended), Shooting Superman, when this is a No-Sell, and Five Rounds Rapid, which is when Superman does require something a bit bigger than bullets to injure, but the shooters never use anything more powerful than concetrated small arms fire.

A character Made of Iron who ends up dying has high odds of it being a particularly prolonged case of this, and probably earning a Dying Moment of Awesome as they keep fighting with a growing number of holes.

Can be the result of a Gangland Drive-By.

Alpha Strike is when a military unit does this to a single target as opposed to a person.

This is a Death Trope, so expect unmarked spoilers!