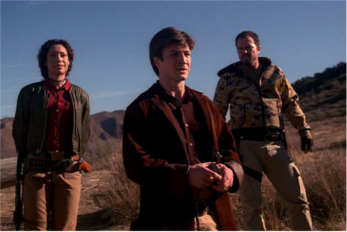 The intended pilot for the series, it would not be aired until three months after "The Train Job", when the series had already been cancelled.

Six years after a bloody and protracted war forced Alliance rule on all colonized planets, veteran Malcolm "Mal" Reynolds is still devastated over the defeat of his cause. Too embittered and strong-minded to be a compliant Alliance citizen, he buys a spaceship—a Firefly-class transport he names Serenity, after the last important battle of the war—and carves out a life on the fringes of civilization: a difficult and often complicated existence, but a free one. With him is Zoe, the only surviving member of his original platoon, now his first mate; her husband, Wash, who pilots the ship; cheerful mechanic Kaylee; and rough-hewn mercenary Jayne.

After illegally salvaging cargo from a derelict spaceship, Serenity's crew heads for the planet Persephone. There they pick up a courtesan, Companion Inara Serra, who rents one of Serenity's shuttles; and, in a last-ditch effort to make some money, take on passengers. On board for the trip to Whitefall, a remote frontier moon: gentle Shepherd (Reverend) Book, cool and aloof Dr. Simon Tam, and bumbling smiler Lawrence Dobson.

But Dobson is actually an Alliance police officer sent to arrest Simon, apparently for the theft of the large crate he's brought with him. When Mal pries it open, though, the crate proves to contain a young woman, whom Simon identifies as his sister, River Tam, astonishingly brilliant but now psychologically damaged by years of unspecified medical torture experimentation research. Simon was able to get her away from the Academy, the Alliance-sponsored facility that was holding her, but does not know how—or even if—he can help his sister heal.

Serenity heads for Whitefall, a frontier moon, to try to sell the salvaged cargo. Mal and Zoe survive an attempted double-cross by their buyer, and get back to the ship having successfully completed the transaction despite themselves. As they'd successfully evicted the Fed at Whitefall, Mal offers Simon and River a place aboard Serenity.