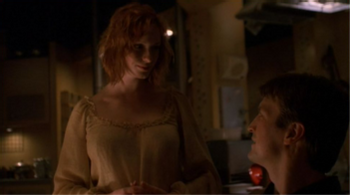 "If anyone tries to kill you, you try to kill them right back."
— Mal
Advertisement:

After a job in which the crew of Serenity kill a group of outlaws that were causing trouble for a town, the crew is given a party, at which they all get drunk. During this party Mal, without realizing it, agrees to marry a young townswoman.

After the crew return to Serenity and take off (just ahead of Feds), they discover the girl has stowed away, and she explains to Mal that she is his payment for saving the town. Mal rebuffs his new bride, then explains that she is not a piece of property, and she should be free to do what she wants with her life.

Saffron (this is the girl's name) eagerly attempts to ingratiate herself to her husband by cooking for him and catering to his needs, offering to wash his feet. Zoe is increasingly uncomfortable with Saffron's views on the roles of women, whereas Wash defends them as quaint and harmless; the two fight over whether Wash is jealous of Mal and his submissive wife. Jayne is actually jealous, and offers to trade her for his favorite gun, Vera. Mal is warned by Book that if he takes sexual advantage of Saffron, he will go to a special level of hell reserved for child molesters and people who talk in theaters.

As it turns out, however, "Saffron" is a career criminal, who boarded Serenity in order to disable its navigational systems and send it through an electromagnetic net designed to clear ships of their crew so they may be scavenged. She attempts to seduce Mal and Wash and disable them with a layer of drugged lipstick called the "goodnight kiss". Mal succumbs; Wash refuses but is knocked unconscious; Inara almost succumbs, but due to her training and a timely interruption she realizes what's going on. Saffron claims to have killed Mal, and escapes on the extra shuttle. Inara runs to Mal's side, and in an emotional moment, kisses him. She has just enough time to roll her eyes at his stupidity before being knocked out by the residual drug on his lips.

The crew recovers with Simon's help, and Wash and Kaylee set about repairing the damage. Zoe is proud of Wash for his loyalty to her, and Inara claims that she lost consciousness because she tripped and fell. Jayne heads to the airlock with Mal and Zoe, wraps Vera in an extra suit to provide "her" with air for combustion, and starts firing, sending the scavengers into space and disabling the net.

Mal tracks down Saffron, and recovers the shuttle. He questions her on the surprising complexity of her plot, and she indicates that for her, the goal is less important than having fun. Inara, after some prodding, admits to Mal that she did not trip. Mal says he already knows she kissed Saffron, and leaves her dumbfounded.