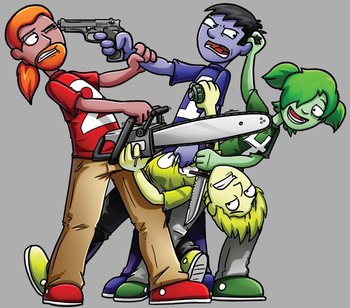 "You got guns on us. You decide to shoot, we're dead. Up top, they got grenades. They drop them down here, you're dead. That's a Mexican Standoff, and that was not the deal. No trust, no deal."
— Lt. Aldo Raine, Inglourious Basterds
Advertisement:

A stalemate in which everyone must lose.

This is typically dramatized as a situation where everyone is standing out in the open and has a weaponnote Usually, but not always, a gun or other firearm pointed at someone else. All the threats are equally balanced to ensure a Mutual Disadvantage; no one is walking away from this standoff with what they came for. That being said, there is also no possibility of withdrawal; everyone is stranded in the situation, and Failure Is the Only Option, either because you attack (and die) or attempt to retreat (and die). Typically, such situations are only resolved by some form of Plot Twist or Deus ex Machina.

This trope can be constructed in a number of geometries: one against one, three or more to a side, free-for-all, or army against army. Frequently ends in a Blast Out when someone gets twitchy, figures the odds differently than everyone else and decides they have an advantage, or is just crazy enough to not care if they die too.

When this kind of standoff happens in Heroic Bloodshed movies, it usually takes the form of two characters with their guns in each other's faces at point blank range. Another version of the Mexican Standoff has three or more participants with guns leveled in ring-around-the-rosy fashion, so the person you've got covered is not the one covering you. Blades could be substituted for guns, meaning the person you've got covered just might survive long enough to retaliate.

Sometimes the situation is resolved in a civilized fashion with all involved parties realizing the suicidal position they are in and agreeing to put down their weapons, usually on a count of three to make sure no one ambushes the other. Occasionally, a downplayed Friend or Foe situation results in a brief version of this.

It's Older Than Radio and has been around long enough to be parodied in the play "The Critic", first staged in 1779. The term itself, however, originated in the 19th century — possibly in Australia, of all places — regarding perceived political indecision in Mexico.

Unsurprisingly, Mexicans don't refer to this as a Mexican standoff. In fact, no quippy Spanish equivalent seems to exist at all.

When entire nations do this, it's upscaled to Mutually Assured Destruction. Also a case of the famous "Prisoner's Dilemma": If everyone puts the gun down, everyone lives. If everyone shoots, everyone will die. But nobody wants to be the first to put the gun down and become vulnerable. Compare the Showdown at High Noon from Westerns, which sometimes take the form of this trope. It's also closely related to the Game of Chicken, where nobody wants to be the first to back down, but if nobody backs down, well…

Not to be confused with Mexican rugby fly-halves. That is a stand-off that happens to be Mexican.