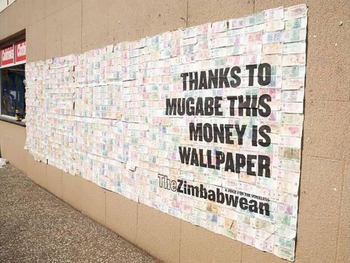 The inflation rates make using money cents-less.
Most national currencies these days might not be directly useful for much, except maybe as firelighters, but it's still generally accepted that most vendors will accept them as payment for goods and services. You might need a lot, or need to exchange one country's money for another, but the cash is worth something. Not so with this currency.
Advertisement:

Usually this applies to the currencies of no-longer-existing governments, such as Confederacy dollars or Reichmarks, or governments that don't exist yet. It also might just be a scam.

Compare Global Currency Exception, which is mostly a video game trope, and Worthless Yellow Rocks, where a priceless rare material to one party is completely worthless to another who has an over-abundance. If it still has some value go to Ridiculous Exchange Rates or Ridiculous Future Inflation. This trope is sometimes used to put the "worthless" in a Worthless Treasure Twist.