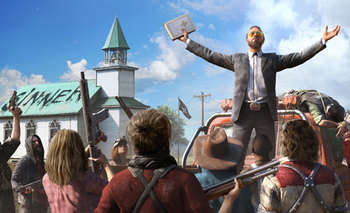 "I am your father, and you are my children".
Roseanne: Edelweiss Corrections School? What's that, some kind of brainwashing camp?
David: No. It says right on the brochure - "This is not a brainwashing camp."
— Roseanne, "Springtime For David"

The word "cult" has many slightly different uses in Real Life, some of which carry a weight of negative connotations and as such are controversial. (If you really want to go into detail, see the Analysis page.) Here's the short version:

As typically used in fiction, "cult" is a pejorative term for what is more objectively termed a "new religious movement". These groups, being religions of recent origin, struggle with small membership, low social standing (generally), and a nigh-unbreakable association with a single charismatic figure, which can be devastating if this person is still alive and capable of scandals and social missteps. All this, coupled with the understandable anger of established Real Life groups at being labeled cults, means that fiction is likely to stick to a tropable stereotype (which is interesting) over an accurate depiction of a new religious movement (which is likely to be offensive and/or boring).

You can expect a fictional new religious movement to fall under one of the following types:

TV cults will usually have one or more of the following notable features, regardless of origin:

They show up in almost any show, from Crime Time Soap and Police Procedural to Speculative Fiction. In SF series, it's likely that what they worship is real, and at the very least more powerful than anything they have experienced before; see Sufficiently Advanced Alien and God Guise. In comedy, it's common to build one around something truly ridiculous.

A cult-like cabal is often at the center of an Ancient Conspiracy.

Many aspects of the standard depiction are drawn from real events, based on such incidents as Jonestown, the Heaven's Gate, the attack on the Branch Davidian home in Waco, Texas, and others. Expect there to be an element of Religious Horror. If a cult is being played for humor value, it will usually very closely resemble the Church of Happyology.

Subtropes including the following:

Don't confuse with the horror Role-Playing Game KULT, the Freeware Game Cult, the series Cult, or with the rock band, The Cult.

Even the most well-regarded cults should not be confused with Cult Classics, which are almost always entirely different. (Although in some cases, you'll get a Cult Classic that deals with an actual cult.)

Former Cult members are usually a Cult Defector, and are given to coming up with Religion Rant Songs once disaffected.

Although sadly, this is very much Truth in Television, Real Life examples are not allowed for obvious reasons; people would just start adding groups they didn't like.