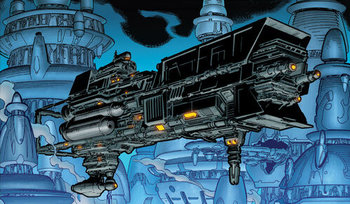 A Prison Ship is a penitentiary, correctional facility, or jail that moves under its own power. Often featured to highlight the questionable practices of villains, the heroics of protagonist, a setting in itself, or just to move the story along. It's also an easy way to set up The Alcatraz; in the middle of the ocean or in space, there's nowhere to escape to.

For the purposes of this trope there are two types of Prison Ship:

Not to be confused with Shipping between prisoners.