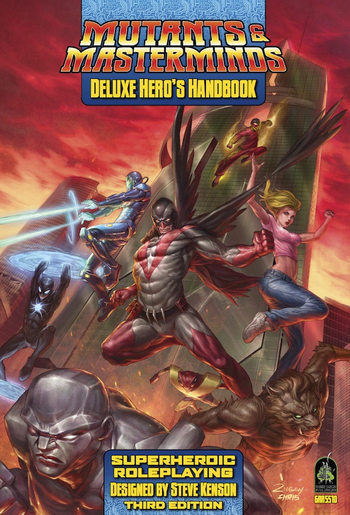 A tabletop RPG from Green Ronin Publishing, Mutants & Masterminds, also known as M&M, describes itself as "The World's Greatest Superhero Role-Playing Game." DC Comics sure seemed to think so. The game uses a heavily modified versionnote So heavily modified that it is now legally not a version of the d20 System from Dungeons & Dragons 3rd Edition, and its point-buy character creation system is designed to allow players to create just about any character they can think of. In fact, the "Roll Call" section of the Atomic Think Tank

, the official Mutants & Masterminds forum, contains fan-submitted stats for pretty much every fictional character that's ever existed, from Superman to Sailor Moon to Shaggy Rogersnote Even Trope-tan.

Green Ronin also published DC Adventures, a licensed RPG based on The DCU and using the 3rd edition of the M&M rules.

The Freedom City 'verse is the default setting for M&M (and the place for FC-specific tropes).