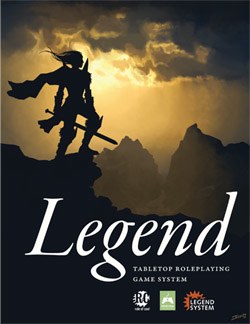 "Legend is built to be understandable, to be learnable, and finally, to be something you can own and change and use without too much fear of making the game go boom."
Legend, Page 8
Advertisement:

first started on The Order of the Stick forum's Test of Spite arena as a series of house-rules to improve the flaws of Dungeons & Dragons 3.5 Edition. It soon became evident to the arena masters that the amount of house-rules that resulted - nearly 80 pages worth of material - was sufficient to reach a critical density and spawn an entire book. Development on a new game system incorporating their house-rules began shortly afterwards, which eventually culminated in a role-playing game that, while still based on the d20 system, was substantially different from Dungeons & Dragons. It aims to provide a sleek chassis for a wide variety of gaming styles and fantasy archetypes with an emphasis on quick, rules light play.

Legend's most obvious defining feature is the Track system. Rather than taking levels in classes, characters are built by combining three or four tracks that each center around a certain ability and gain every ability from these tracks as they level up. Each class consists of three tracks, which center around different abilities - for example, the default Barbarian's abilities center around Raging (Path of Rage), Hitting Lots of Enemies At Once (Path of Destruction), and Blocking Things With Your Chest (Path of the Ancestors). Multiclassing is accomplished by switching out one track with another - to continue the above example, someone wishing to play a technically minded fighter could swap out Path of Rage with the Ranger's Iron Magi track and focus on stringing together precise sequences of blows, or switch Path of the Ancestors with the Rogue's Acrobatic Adept to focus on dodging and weaving through the battlefield. The sheer quantity of tracks (almost 60 and counting) allows for some rather unorthodox but 100% viable builds.

There is no default setting in the book, though two settings (Hallow and Chion) are currently in the works. There has also been an adventure released called Osaka Street Stories, set in Japan in the early 1990's, and another called Comfortably Grim is being written.

A beta version was officially released on November 25th, 2011 though the charity Child's Play, and updates to the beta came out in May 2012 and January 2013. The 1.0 edition was released on June 17th, 2013. Word of God was that more content was in the works, but in 2016 it was admitted that Legends as a project was dead.

Not to be confused with the Mongoose Publishing game Legend, which is a continuation of their second version of RuneQuest after their license to the name expired.

Tropes appearing in Legend are: